I can’t believe it’s almost been three weeks since we returned from our vacation. I meant to write about it sooner…c’est la vie, time marches on…

What a great break we had, and we so needed it! Of course the week was filled with ups and downs, the kind that always arise when you put five people in one van or one small apartment for seven days, yet it was worth it all. We made memories and we shared it as a family; that is priceless.

The first day at the beach, the water was relatively calm. I could actually float for a while without a wave interrupting me. My husband was so excited because he found a conch shell in the ocean when he stepped on it(our family always makes a point to collect as many shells as possible). He grabbed it up and took it back to our spot in the sand, hiding it under a beach towel. We all played in the water a while longer, then my daughter and I decided to go rest for a bit and soak in some sun.

We were laying there listening to a family behind us talking about a crab they had found and arguing about whether or not it was a hermit crab. The dad even “googled” hermit crabs to prove his point that this was one, since the mom said it was too big. He proudly announced it was a a giant conch shell hermit crab….hmmm, that opened my eyes, and I started watching the kids playing with it…was that my husband’s shell? I soon asked my daughter about it, and she checked under the towels where he put the shell…sure enough, it was gone. We started to chuckle and asked the kids where they found it. “It was just crawling over here in the sand”, they said. We shared the story with them, but they didn’t laugh, they just got really protective of their crab. I guess they thought we were going to stake a claim on it and take their new found pet away from them…..honestly, at this point, we didn’t want the shell any longer, not if it had a giant crab in it! (have you looked up giant hermit crabs on google? you should; you wouldn’t want one either!) Ironically, my husband was also a bit upset that the kids ended up with his shell; he had declared ownership of it and thought they had taken it from him. I told him they couldn’t steal something that had voluntarily walked away from his hiding place!

The days slowly moved on as we soaked up every ounce of them. Time at the beach, in the condo, at restaurants, walking to and from the beach, and driving around the island, was treasured and every opportunity for fun or to make a memory was embraced. We laughed a lot, amidst our familial arguments. One recurring source of joy was a baby croc we kept seeing as we walked to and from our condo to the beach.

Don’t get too excited….it was not a crocodile; it was a small, pink baby croc shoe! A toddler must have lost it as she rode in a stroller or was carried to and from the beach. The first day I saw it, I just left it where it was on the side of the road, hoping the family would come back and find it there. I felt a bit sad for them because I know how I am when someone in my family loses something… We kept seeing it there as we walked back and forth 2 or 3 times each day.

Our friends came to visit us late on the fourth day of our stay. As we walked to the beach the next day, their oldest daughter and my oldest son decided to make a game with the baby croc. They would place it in a different spot along our path every time, seeing who would find it next. I smiled as I watched these two college students turn something so silly into a bit of fun, just like when they were little and played together; what a joy to be with our friends and for our kids to have that time together again!

We planned family pictures, with our two individual families and all together, for the last full day of our trip. Our dream of being at the beach with our best friends was coming true and we wanted to capture the moment forever! Besides, it was my husband’s and my 25th anniversary, so we needed to memorialize it. All week, we had noticed family after family who had the same idea as us taking their pictures at the beach. Each one wore white shirts or dresses with denim or khaki bottoms, it seemed. Obviously, our idea wasn’t original!

The kids decided we should take the pictures in the grasses with the ocean off in the background. None of us were thinking of the fact that the tall grasses were in the sand where we had noticed ants crawling all week as we walked the boardwalk to the beachfront. It also didn’t occur to us that those ants might not be friendly.

The bites started almost immediately, but we were determined. We smiled big and kept our feet still long enough to snap pictures, then we danced like we were trying to make it rain. Between the biting and the intense heat, it’s a wonder we accomplished our goal; however, our family pictures turned out great, and we have the memories locked in our hearts forever. 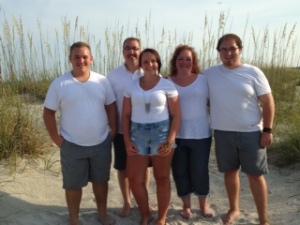